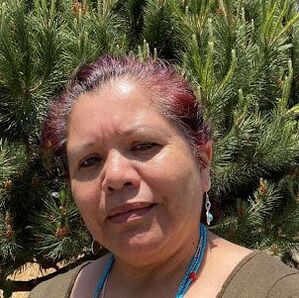 Ms. Dolores Jeff started working as a teacher at Oakland Unified School District's Hintil Kuu Ca Child Development Center about five years ago – but she’s been nurturing young minds for much longer, including back when her own son attended Hintil decades ago. At that time, the school was filled with Native children, says Ms. Jeff, who is Northern Sierra Miwok. “My grandchildren went through the program too!”

Hintil Kuu Ca -- a Pomo phrase meaning "Indian children's house” -- began in 1974, as an outgrowth of a school created during the months-long occupation of Alcatraz Island from 1969-1971.

While the school now cares for children ages 3 to 5 from a variety of backgrounds, teachers like Ms. Jeff still bring in many aspects of Native culture. Earlier this year, for instance, the school invited the Scotts Valley Band of Pomo Indians to do a blessing before a major remodel of the grounds. “With Native Americans, when we have something that’s been around for a long, long time – to rebuild it, we have a blessing to say goodbye to the old and in with the new,” says Ms. Jeff.

How did you first get interested in working with young children?

I started working in early learning back in 1983. I lived up North at the time, in a rural area. I saw that they were recruiting families into a home-based Head Start program. I wanted something more for my daughter, and I also wanted to go back to school. It was a really great program where they gave me opportunities to take ECE courses in college. I decided I really liked early education! From there, I became a teacher’s assistant. But living up in the mountains, it was really hard to get more education.

What drew you to Hintil?

When my son was young, I kept hearing my grandmother say “you should go to Hintil.” My grandmother was very involved with the Intertribal Friendship House, very involved with the Native community. She was very involved in basketry. Our history is up in Pine Grove – her picture is in the museum there. She took people on trips to make baskets, and gave me a lot of insight into my culture. So, she encouraged me to take my son to Hintil. She knew about it because her own daughters had gone there back in the 1970s.

You recently took part in an Oakland Starting Smart and Strong panel discussion on working with multilingualism. What’s most important for people to understand?

When you share your language and culture, it helps families feel more comfortable to share theirs too. At Hintil, we support families bringing their own language in, bringing in music, books, or just coming in and tell a story.

I love encouraging families to come in. That’s how I started, when my own kids were young!

I have one family that’s actually trilingual and they want to learn more languages. We use some of our Native language at school. What’s important is to be very open to working with the families and understanding their interests for their children.

To learn more about the history of Hintil Kuu Ca, Ms. Jeff recommends this video made by a former student.